Political innovation in your inbox.
Subscribe to the Foundation's newsletter
Follow us on
HomepageStudiesCovid-19TerritoriesCovid-19: Mapping of emotions in France
Studies Madeleine Hamel May 2020

Covid-19: Mapping of emotions in France 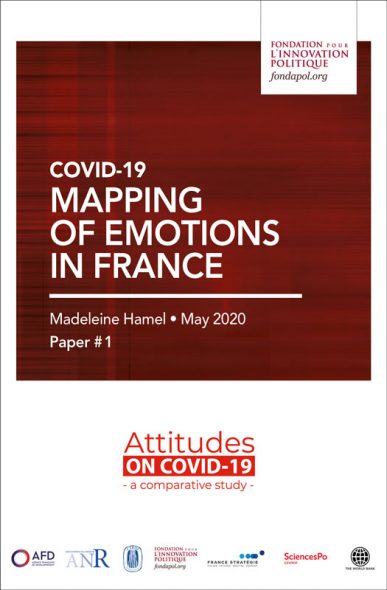 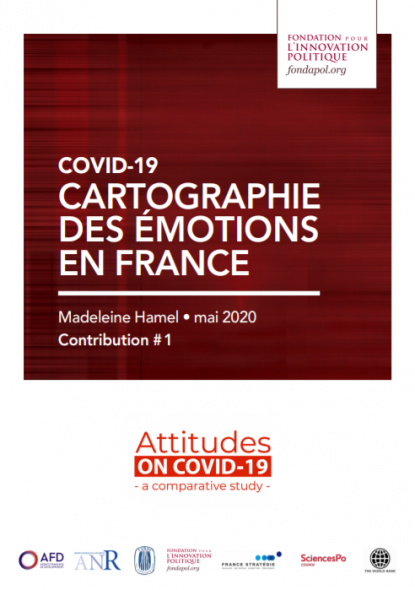 France: regional mapping of emotions on the eve of the end of lockdown

The evolution of emotions regarding Coronavirus in French regions

After the end of lockdown, less fear, less anger, but hope remains at half-mast

The “Citizens’ Attitudes Towards Covid-19” survey aggregates data from the Provence-Alpes-Côte-d’Azur and Corsica regions.

Since we do not have data for France’s overseas territories, they are not included in this regional comparison of emotions felt in France regarding the Coronavirus These territories are also not represented on the maps accompanying this analysis. In the rest of this study, the term “region” is used but only includes the twelve studied regions. The “Citizens’ attitudes towards COVID-19” survey aggregates data for the Provence-Alpes-Côte d’Azur and Corsica regions.

Political, economic and social systems must overcome the considerable challenges associated with the Covid-19 pandemic. This health crisis is disrupting our lives and our relationship with others; it is affecting our emotions, our behaviours, our life plans. In this context, a public opinion study, collective representations and attitudes help to guide public action and encourage debates. It is also a way of contributing to the memory of an unprecedented event. This is why the Fondation pour l’innovation politique is a stakeholder in the international research programme entitled “Citizens’ Attitudes Towards Covid-19”. This research takes the form of a series of public opinion surveys conducted by Ipsos at regular intervals in twenty countries2.

This programme aims to provide an unprecedented monitoring of public opinion in the context of  the Covid-19 crisis: feelings experienced, one’s relationship to health safety, acceptance or weariness regarding the protective devices put in place or public health recommendations, etc. These surveys should enable, on the one hand, a better understanding of the way in which different publics adapt psychologically to the measures of social distancing and, on the other hand, a better apprehension of consent in relation to the measures put in place.

This contribution focuses on data of the emotions reported by the French interviewees between March and May 2020, in a comparative perspective between twelve regions3.

The French population has already been surveyed eight times, at intervals of two to three weeks. However, in order to guarantee the robustness of the regional samples, we decided not to take into account the data from 16 March and 1st-2 April, in the graphical representations and in our calculations as they did not meet the conditions for guaranteeing the regional representativeness of these samples. A ninth round of the survey was administered on the 22-24 May, its data are analysed page 13.

At the same time, we used data on the number of hospitalisations by region to compare the emotions reported in the twelve regions studied with the data concerning the fight against the Coronavirus. 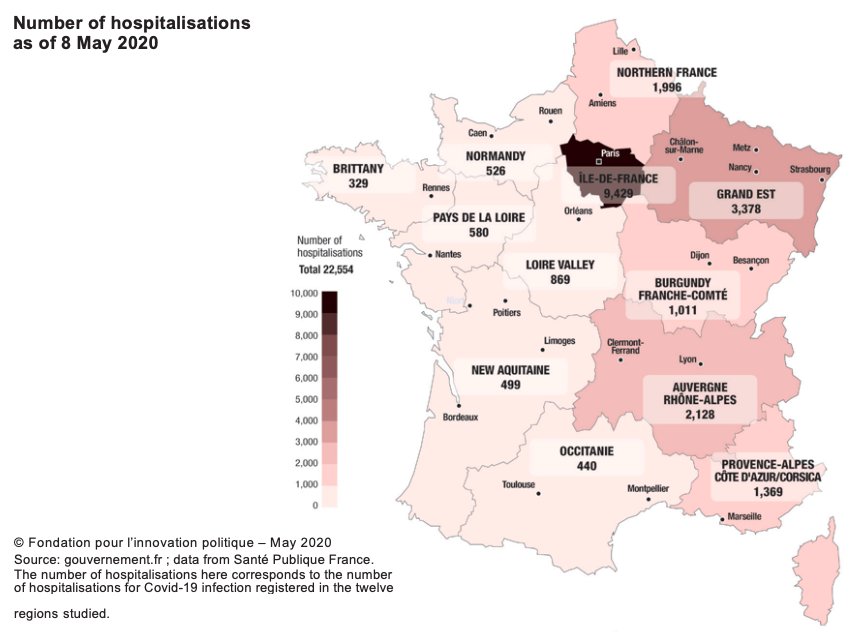 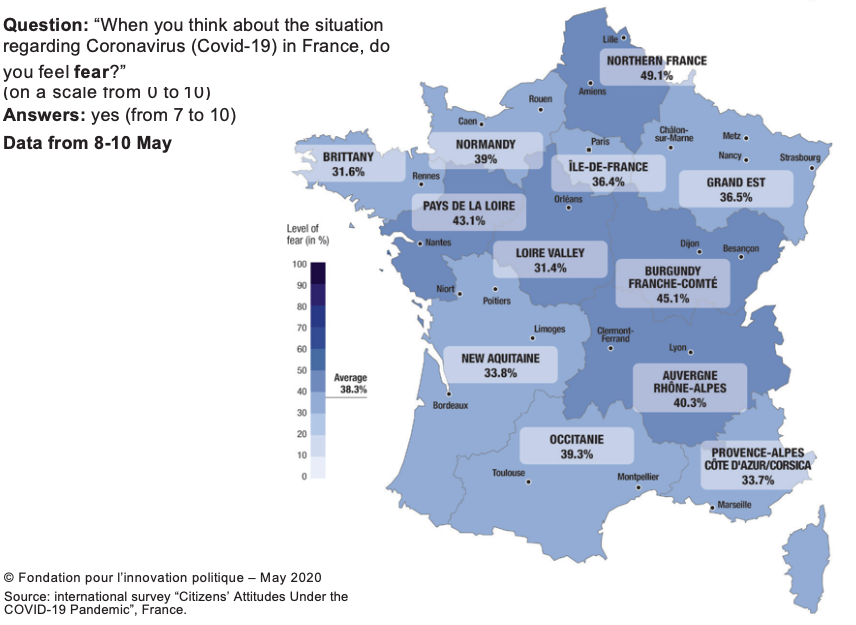 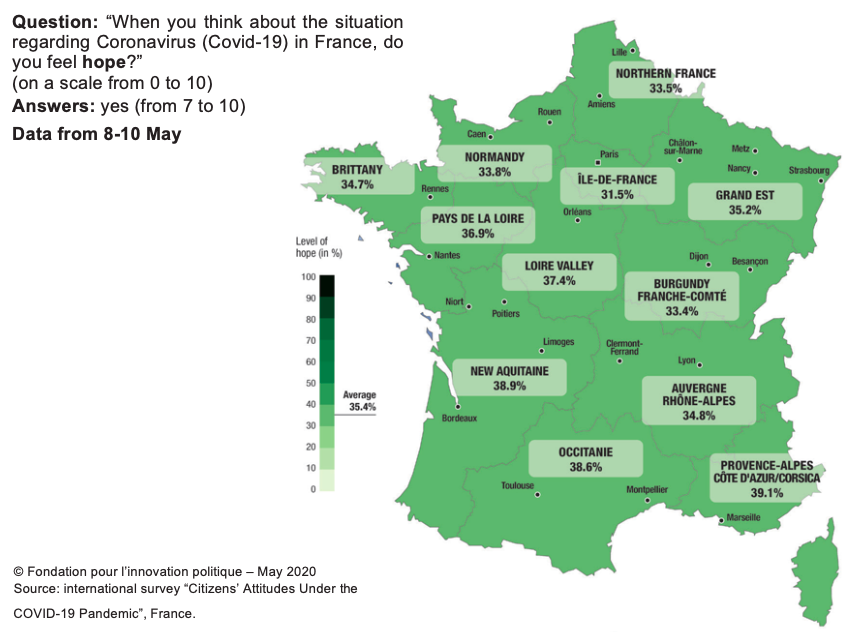 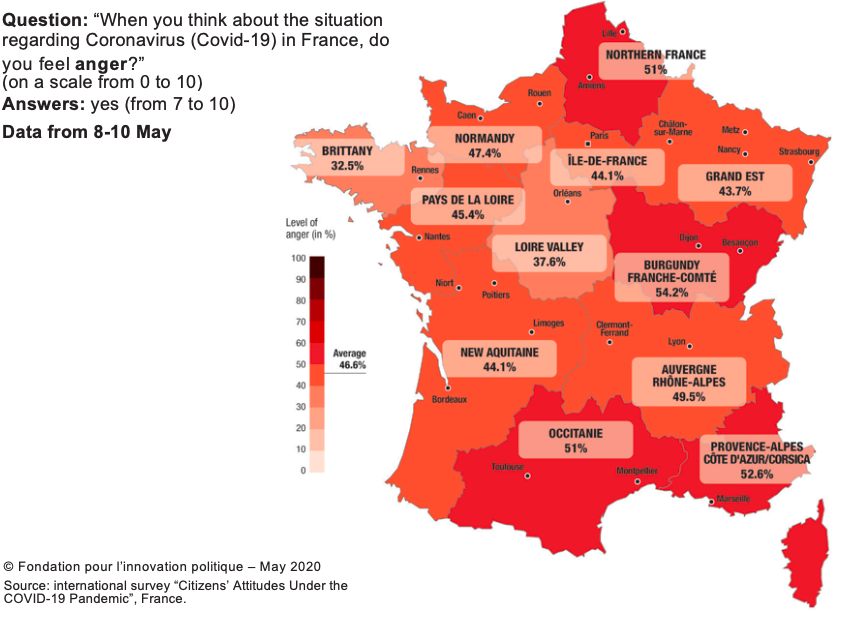 France: regional mapping of emotions on the eve of the end of lockdown

The sense of hope does not show significant differences between regions. However, Île-de- France residents are the least likely to say they feel hope (31.5%); conversely, the Provence-Alpes-Côte d’Azur/Corsica region is the region with the highest level of hope recorded on the 8-10 May (39.1%).

The feeling of anger is more heterogeneously distributed throughout the country. In four regions, more than one in two inhabitants say they feel angry about the current situation: in Burgundy-Franche- Comté (54.2%), in Provence-Alpes-Côte d’Azur/ Corsica (52.6%), in Occitanie (51%) and in Northern France (51%). In two regions, the level of anger is significantly lower: Brittany (32.5%) and Loire Valley (37.6%). The other regions are in an intermediate group, with anger levels ranging from 43.7% to 49.5%.

Fear is more often cited in the central regions and in the northernmost region, in Hauts-de-France. It is interesting to note that the regions with the highest number of hospitalisations are not always those where fear is most prevalent.

If the geography of emotions in France reveals contrasting responses, it is through their evolution over the last few months that we can observe specific territorial trajectories and that we can see links between reality on the ground and regional feelings. 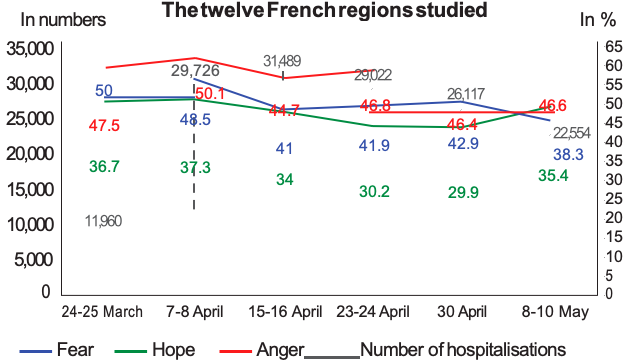 The evolution of emotions regarding Coronavirus in French regions

Fear is declining in most of the regions studied

Throughout France, each of the emotions studied follows distinct trajectories. At the beginning of the period, on average, one in two French people (50%) declares feeling fear when thinking about the situation induced by the Coronavirus. Thereafter, it is during the 15-16 April survey that we observed the lowest levels of fear (41%), but also of anger (44.7%). Paradoxically, this is the time when the number of hospitalisations reached its peak. This apparent discrepancy could be the effect of the announcement by the French President on 13 April 2020 that the process of ending the lockdown would begin on 11 May.

After an imperceptible increase (1 point more between 23-24 April and 30 April), the proportion of French people expressing fear decreased again during the 8-10 May survey, reaching its lowest level in most regions (38.3% on average, 11.7 points lower than at the beginning of the period). A few regions are the exception to this pattern: Burgundy- Franche-Comté, which experienced a decline in fear later, on 23-24 April, and Normandy, which recorded a significant peak on 7-8 April, with 57.1% of respondents reporting feeling fear. The highest level of fear over the period is recorded in Northern France (59%) during the 24-25 March survey, followed by the Pays de la Loire (58%) on the same dates.

Cautious optimism throughout the country

While fear diminishes, anger does not…

Many French people reported feeling angry when they think about the situation created by the Coronavirus. Overall, throughout the entire period, the level of anger did not drop below 44.7% (15-16 April) and changed only slightly. Though fear may decrease, anger does not. Some regions show exceptionally high levels of anger. This is the case, for example, in Burgundy-Franche-Comté where, at the beginning of the period, 62% of the inhabitants said they were angry (the maximum level among all the regions studied) and where this level of anger does not drop below 49.4%. This region is thus the region where anger is the most widespread (54.2% on average), followed by Provence-Alpes-Côte d’Azur/Corsica (52.6%), Northern France (51%) and Occitanie (51%).

However, the graphs on pages 8 and 9 illustrate the fact that, beyond common dynamics, different patterns can be observed in different regions, as shown in the following three examples.

The Breton exception: optimistic and not too worried

Brittany is the only region where, at the beginning of the crisis, the proportion of respondents feeling hope when they thought about the evolution of the Coronavirus crisis is higher (43.6%) than the feelings of fear (43%) and anger (37%). However, the level of hope dropped 14 points between the 7-8 April survey (44.8%) and the 23-24 April survey (30.8%). It then rose to 34.7%. Brittany also stands out for the low proportion of inhabitants who said that they feel angry, averaging 39.2% over the entire period (compared with 46.6% for all twelve regions surveyed). Moreover, as of 8-10 May, only 32.5% of Bretons expressed anger and 31.6% expressed fear, while 34.7% said they felt hope. Even in comparison with other regions just as minimally affected (0.11 hospitalisations per 1,000 inhabitants) such as New Aquitaine (0.11 hospitalisations per 1,000 inhabitants) or Occitanie (0.12 hospitalisations per 1,000 inhabitants), public opinion in Brittany shows particularly low levels of anger and fear.

In Occitanie, anger is increasing despite an improvement of the situation

Grand Est, an illustration of the      divergence between perception and reality

The Grand Est region was one of the regions most affected by the Coronavirus in metropolitan France. However, its inhabitants do not express significantly more fear or anger, nor less hope than the others. By ranking the twelve regions for which we have data from the highest average level of fear to the lowest, the Grand Est region even comes in 9th place, with 40.2% (compared to 43.8% for the average recorded in the twelve regions studied). The same is true for anger: The Grand Est is one of the regions where feelings of anger are least widespread (43.7%). 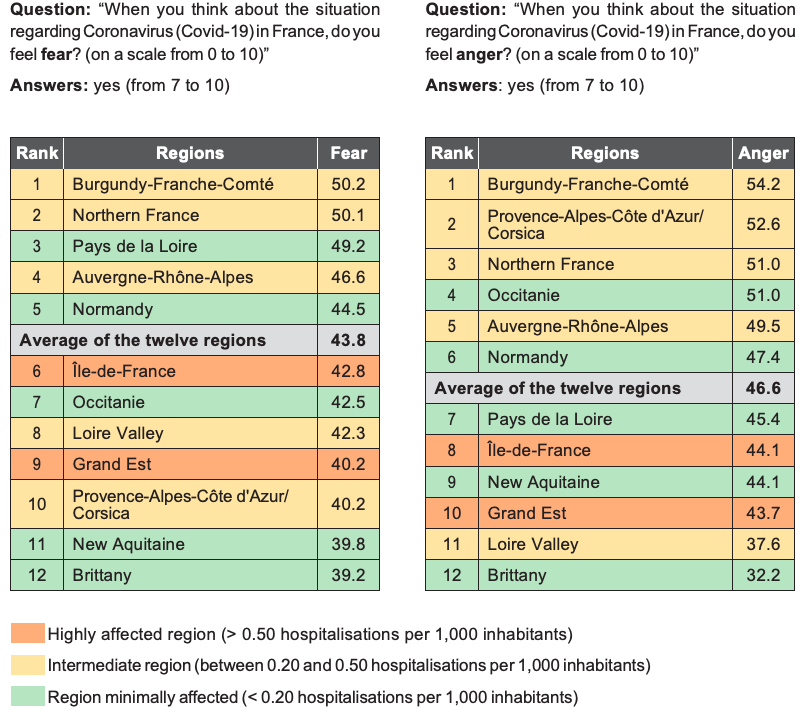 The case of the Grand Est region helps to demonstrate that, for a given region, on the eve of the end of lockdown, there is no direct link between the number of hospitalisations and the spread of feelings of fear or anger among its inhabitants. In regions with relatively fewer cases, if any, this discrepancy between the feelings experienced by the population and the reality of the situation could be explained, at least in part, by an anxiety provoking expectation of the wave of the virus being reported elsewhere in the country. Symmetrically to this apprehension of being contaminated in turn, we find another situation, that of heavily affected regions where the capacity for resilience would have developed, as well as the hope of getting out of it. The fear of being affected by the pandemic among those who have been spared could be matched by the hope of overcoming it among those who have been most affected.

After the end of lockdown, less fear, less anger, but hope remains at half-mast

On 7 May, on the eve of the end of the lockdown, the government published a map to classify the French regions based on a synthesis of three criteria: the dynamics of the epidemic, the number of people in intensive care units (the ICU) and the ability to test and trace individuals who are believed to have come into contact with the virus. The performance of the departments for these different indicators conditioned the mode of exit from lockdown: depending on the colour assigned to the department (red, orange or green), the restrictions put in place as part of the fight against the Coronavirus have more or less eased up. A new map will be published when the government launches the second phase of the reopening after lockdown.

According to this classification, five regions are in red, the others are in green. Of the regions classified in red, one, Mayotte, is not part of the regions studied here. Among the four others, three have levels of fear above the average of the twelve regions (33.8%): Burgundy-Franche-Comté (47%), Northern France (43.3%) and Île-de-France (35.2%). The Grand Est region is an exception with a lower level of fear (29.6%) and closer to the three least-affected regions (Occitanie, New Aquitaine and Brittany) than the other regions in red. Furthermore, following a reduction in the levels of fear expressed there, these three least-affected regions now appear at the bottom of the ranking, which was not the case in previous surveys. Perhaps this could be understood as a first effect of the end of lockdown, bringing relief to the inhabitants of these regions, who, although confined to areas with lower levels of the virus, could have developed a sense of frustration.

Question: “When you think about the situation regarding Coronavirus (Covid-19) in France, do you feel fear? (on a scale from 0 to 10)” 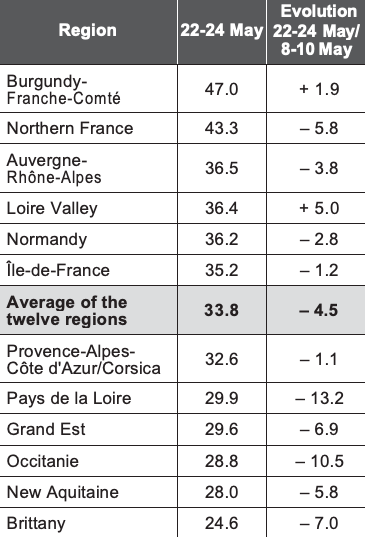 The end of lockdown seems to be a source of appeasement for many French people. Anger remained very high and barely varied over the last two months (March to May 2020), yet it decreased significantly for the first time on 22-24 May.

Although the number of hospitalisations continues to decline in each of the twelve regions studied, and while the situation appears to be improving, the sense of hope is not increasing. It has slightly increased in Burgundy-Franche-Comté compared to 8-10 May (+4.5 points), but elsewhere it remains constant or is decreasing. On average, only a third (32.8%) of French people in the twelve regions studied say they feel hope when they think about the situation caused by the Coronavirus pandemic. This proportion reaches its minimum (28%) in Île- de-France and its maximum (37.9%) in Burgundy- Franche-Comté. It is also in the latter that the highest level of fear (47%) was recorded on 22-24 May.

Map of the end of lockdown in France (7 May) 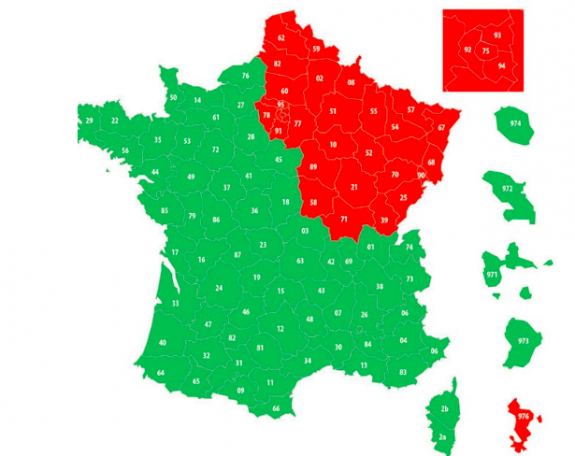 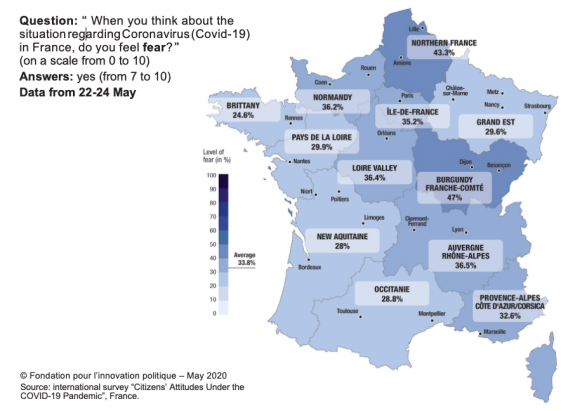 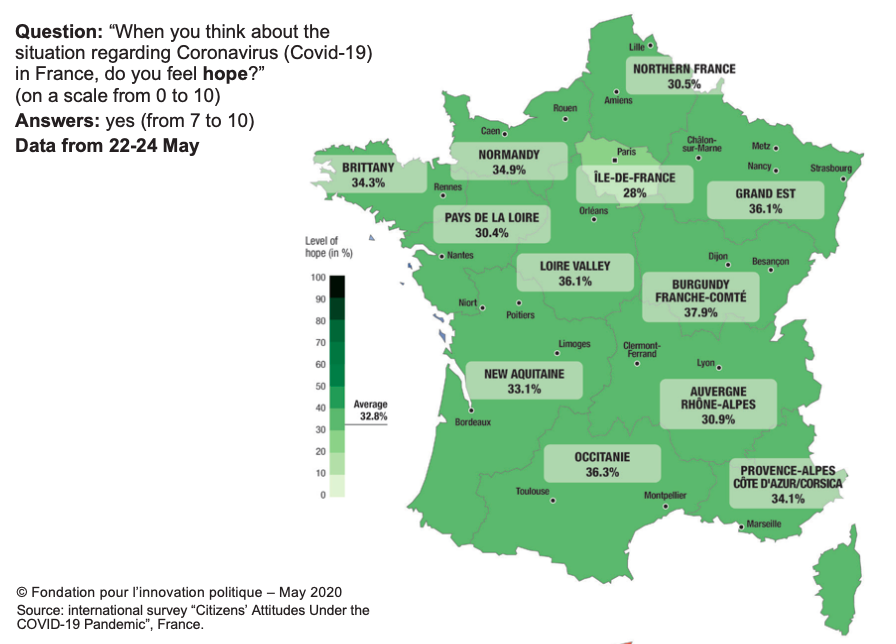 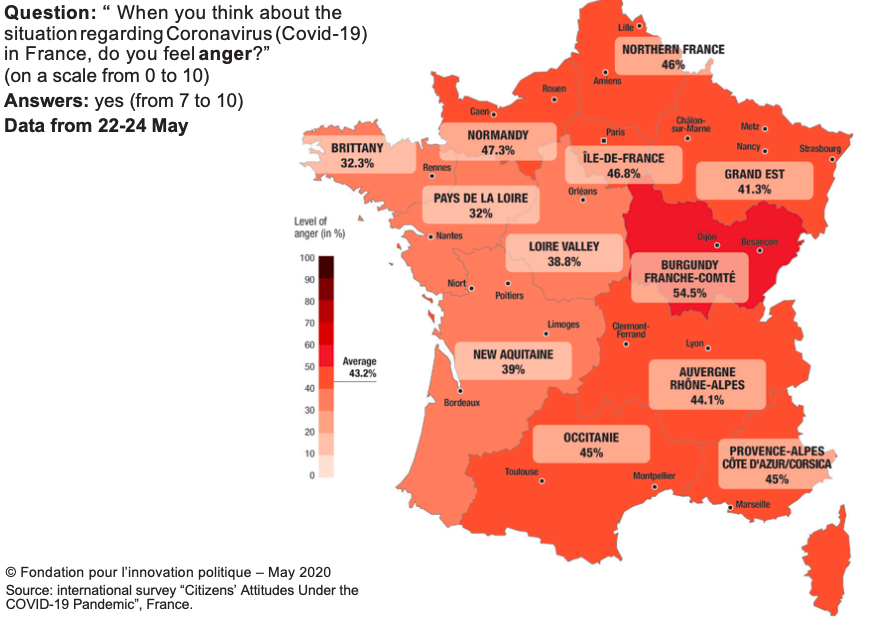 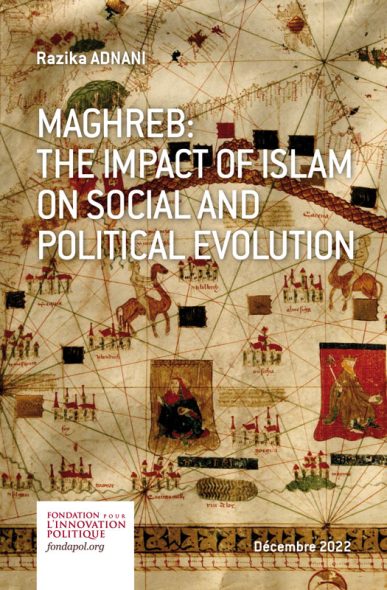 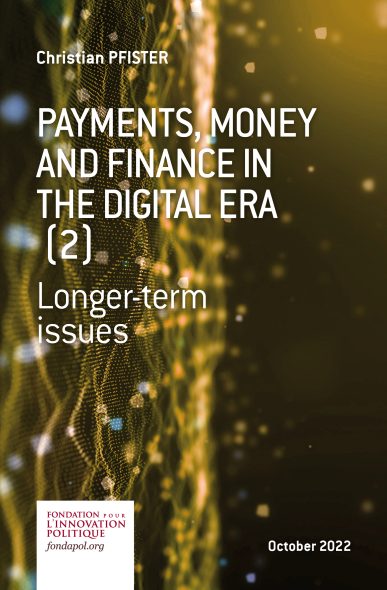 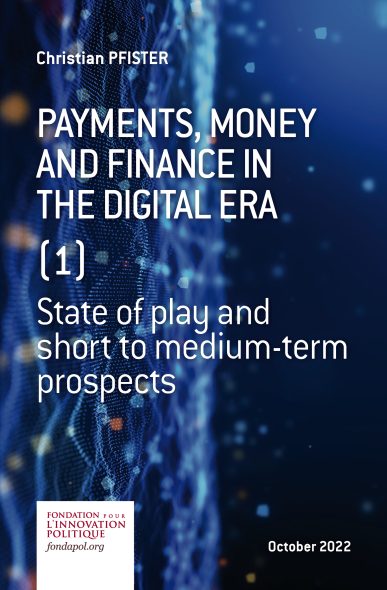 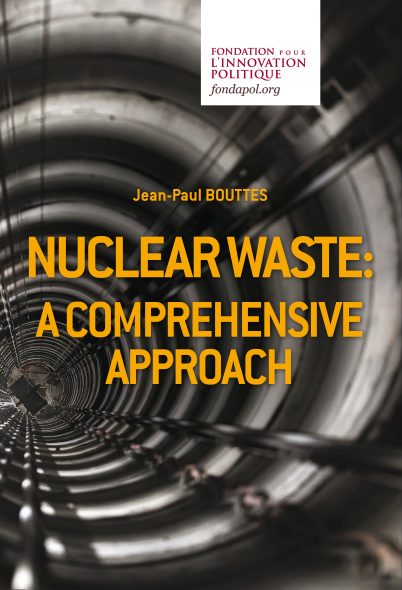 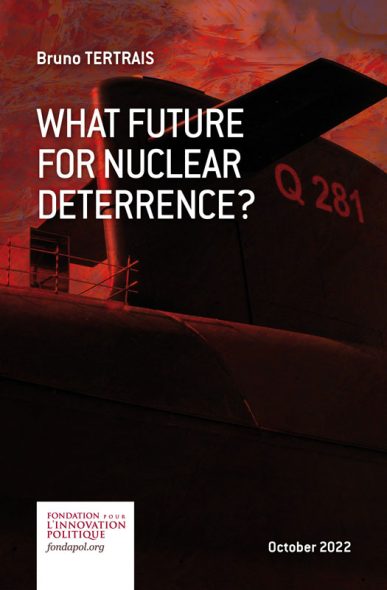 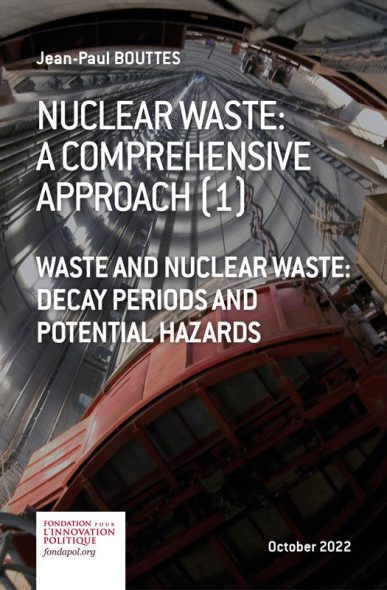 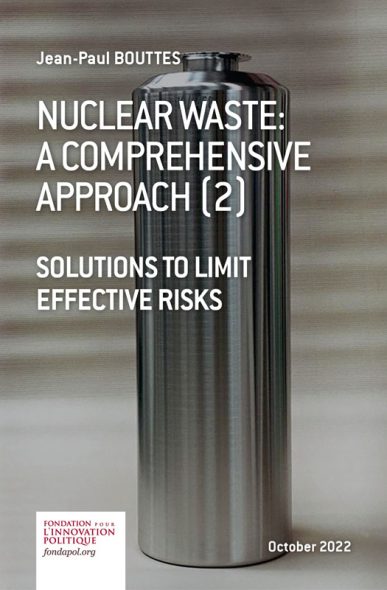 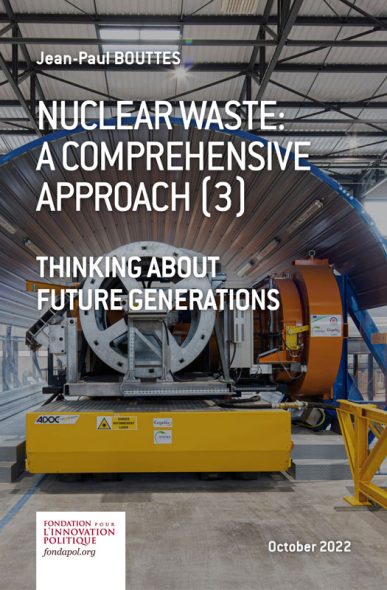 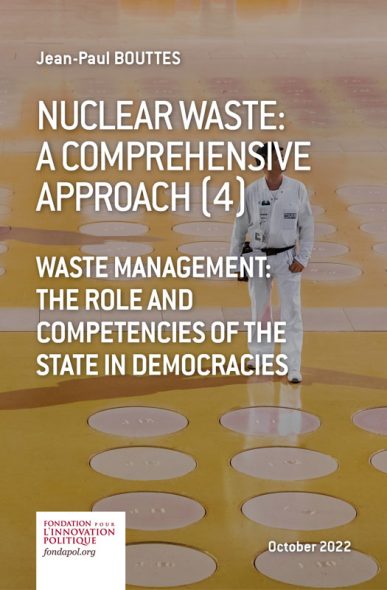 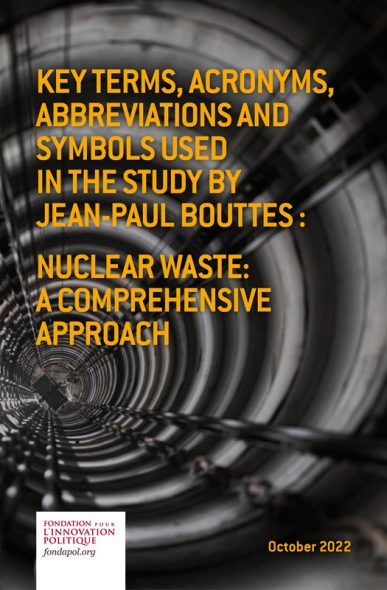 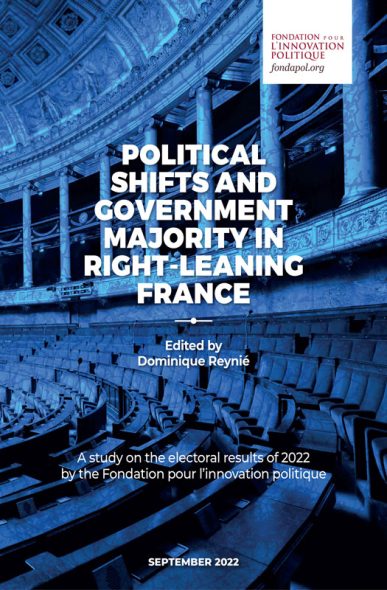